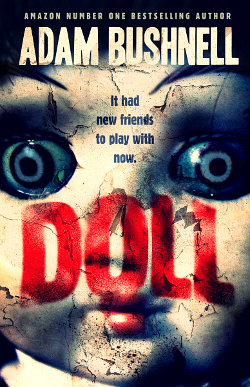 DOLL focuses on a legend from Mexico City about a man named Don Barrera who found a drowned girl on the island where he lived. The authorities took the body away but Don Barrera later found her doll and hung it up as a sign of respect to the deceased girl. He then began collecting dolls to be her ‘friends’ and hung these up too. At the time of his death, Dan Barrera had 1,500 dolls on display on the island. The Island of Dolls has now become one of Mexico’s top tourist sites attracting many visitors from around the world. The island and the legends that have formed since have featured in many newspapers, Youtube videos and recently on Amazon’s ‘Lore’ TV series.

In DOLL, the narrative is about a boy named Kyle who steals a doll from the island when on a family trip. He smuggles it back to the UK but is killed in a car crash on the way home. The doll ends up being given to his cousin, Emily, and strange things begin to happen to her. She reluctantly accepts that what is happening to her is down to the doll and she and her friends try, unsuccessfully, to get rid of it. Eventually she is forced to investigate the doll’s history and discovers the legends that surround it. She and her family must return the doll to the island it came from or suffer the same fate as her cousin.